REVIEW: Between the Devil and the Deep Blue Sea 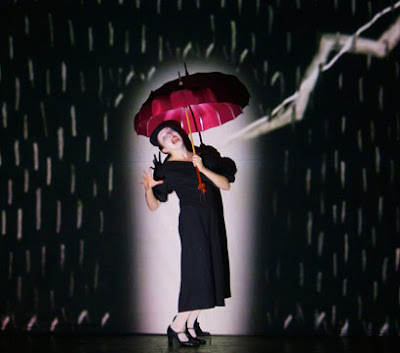 1927 is an English cabaret company, whose acclaimed Between the Devil and the Deep Blue Sea is currently being performed at the Malthouse Theatre here in Melbourne. The show, an inspired blend of silent film homage and delightfully gothic spoken word, is a singular delight, and one I strongly recommend for film buffs and theatre afficianados alike.

The concept of the show is deceptively simple: two performers (writer/director Suzanne Andrade and Esme Appleton, both appropriately dressed in Louise Brooks mode) perform on stage against a backdrop of scratchy, flickering silent film-inspired projections by Paul Barritt, to a live piano score by Lillian Henley. I say deceptively simple, because the timing required to make the show work - for voices to speak in unison and for performers to match their movements to the images and sets projected on and behind them - clearly requires significant labour.

There's a wonderful, playful sense of the grotesque permeating the show, as well as a clear love of the tropes of silent cinema and the entertainments of the day. From a Perils of Pauline like moment with a character tied struggling to a train track (perfectly evoked with the simplest of animation) to the chilling yet hillarious image of a menacing army of gingerbread men, the visions presented by 1927 are twisted, grand and glorious. Nor are all their stories firmly rooted in the past; as references to Mr Squiggle, and another story in which the bored children of the upper middle class play act being homeless crack whores, delightfully illustrate.

From unexpected lunacy (a piano-playing proboscis monkey) to menacing and monstrous children whose macabre games shatter the fourth wall, Between the Devil and the Deep Blue Sea is a thorough delight, whose any major fault is that it ends so soon after it begins. I highly recommend that you visit the Malthouse post-haste before its all-too-brief season ends on July 13.
Posted by richardwatts at 4:03 pm

splendid, splendid show - so clever and perfectly played. And how many times have I been bamboozled by a magic stick... Reminded me of so many things - Arsenic and Old Lace... even that old Goodies episode where Tim played the nanny to that diabolical child... and what sounded like snatches of Erik Satie - do you know if the score was all original?

And yes, it was over far too soon, I could have happily sat there all night!

The photo looks interesting. Like Mary Poppins with a twist. ;-)

I need a gay opinion on Casablanca in my blog. Anyone?